Voters want to come to the table on Bahia Mar 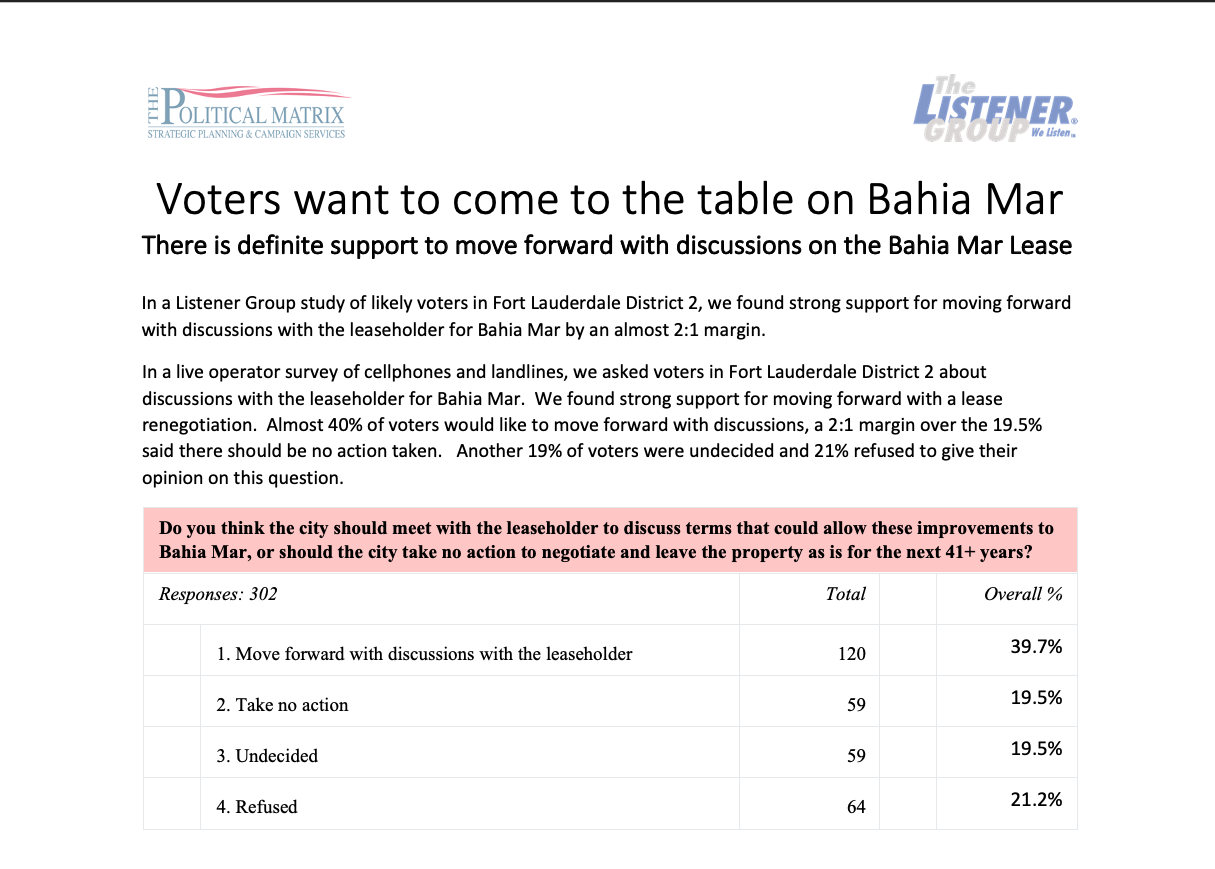 In a Listener Group study of likely voters in Fort Lauderdale District 2, we found strong support for moving forward with discussions with the leaseholder for Bahia Mar by an almost 2:1 margin.

In a live operator survey of cellphones and landlines, we asked voters in Fort Lauderdale District 2 about discussions with the leaseholder for Bahia Mar.  We found strong support for moving forward with a lease renegotiation.  Almost 40% of voters would like to move forward with discussions, a 2:1 margin over the 19.5% said there should be no action taken.   Another 19% of voters were undecided and 21% refused to give their opinion on this question.

Additionally, we surveyed the residents about the redevelopment and renovation of city properties along the beach.  In the last decade, the city has created an Oceanfront Park and amphitheater at Las Olas and A1A, built a municipal garage at the Las Olas Marina, and moved forward with revitalizing the Swimming Hall of Fame.

We saw that 25.2% support the way the city has redeveloped the beach, with 14.8% opposing it.  Over half the voters were unsure or refused to answer.  This is not unusual in an area with such a large population of relatively new voters who moved here within the last decade.

ABOUT THE LISTENER GROUP:

Starting as a call center and market research center in 1998; since 2010 TLG has been serving clients as a full-service Marketing Research, Advertising, Public Relations firm. If your success depends on other people—customers, clients, patients, readers, viewers, and voters in whatever role these people’s opinions of you matter—you need The Listener® Group.  Headquartered in Pensacola, we have developed a team that has placed us, continuously, as the most accurate political and public policy polling firm in the Southeastern United States. We deliver a comprehensive blend of market research and advertising products that work in concert to maximize the effectiveness of your message.  For more information you can contact Greg Fink at 850.384.7008 or greg@thelistenergroup.com.

All Rights Reserved, The Listener Group 2020